For those of us who come to the Xamarin Forms world from WPF, the learning curve is not as terrible as for others.
After all, it is the same old xaml which we learned to love and a lot of concepts that we already know from WPF migrated successfully to Xamarin Forms.
However, sometimes, there are things that you take for granted and you pay a high price for it later on in your development.
Today, I’m going to talk about one such example: Lifecycle events on views.

Let me tell you, this was a real slap in the face for me.
I got so used to the fact that the Loaded and Unloaded events are something so common and easy to use that I didn’t even stop to question their existence in Xamarin Forms.
After a short period of disbelief and trying to search the web for answers, I came to the horrifying conclusion:
Xamarin Forms visual base classes don’t have lifecycle events!

After calming myself down and searching the web for some more ideas and solutions,
I’ve created a Xamarin Forms Effect, with platform specific implementations, which will expose those events.

If you feel confident and just want the code, feel free to visit my GitHub page for the full solution.
If you want the complete solution and explanations, you can find it in the next sections.

Each platform provides us with different options to register to the specific lifecycle events that are provided by the specific platform.
Our mission? Unify everything under one single effect, which can be used across Xamarin Forms project.
Pretty straight forward.

Before we dig in, I strongly recommend that you get yourself familiar with Xamarin Forms Effects first. My entire implementation relies on it.

Let’s start from the main Xamarin Forms project.
I want to keep the example as simple as possible, so no MVVM and no clever approaches (Other than the effect, obviously). Just a straight forward example.

We are going to start with the creation of our routing effect in the main Xamarin Forms project.
The effect is pretty simple and contains no logic. Just the two events and two methods that will raise those events.

The only thing that I feel the need to explain here are the two consts.
I’ve created those simply because I don’t like literals and prefer to use consts whenever I can. 🙂

Our main page will consist of a single button inside a grid, with a click event that will be handled in the code behind.

We will attach to the button the ViewLifecycleEffect and handle the Loaded and Unloaded events in the code behind as well.

The code behind will also be very simple and straight to the point:

As you can see, the Loaded and Unloaded events are handled only via the effect. But no one is raising them.

Coming from the WPF world, the UWP platform was the easiest for me, since there are already Loaded and Unloaded events on the FrameworkElement object.

So the solution is pretty straight forward:

Note the resolution group and the effect export above the namespace. Note the UWP specific type that is exported.

In native android, this is handled by passing in a listener implementation, but Xamarin is kind enough to provide us with good old C# events. 🙂

So after everything combined, the code looks very similar to the UWP platform code:

Note the resolution group and the effect export above the namespace. Note the Android specific type that is exported.

Now comes the tricky part. At least it was that way for me.

iOS exposes the lifecycle events as overridable method in the derived type. These methods are actually very useful in case you actually derive from one of the iOS classes.
But sadly, this is not our case, so I had to be creative.

Digging around the web, I’ve stumbled upon this interesting answer on SO.

Basically speaking, we can assume that once the Superview property is initialized, the view is loaded. This is great! But how can we observe it?

Experienced iOS developers would probably yell right away: “KVO”! But for me it was something completely new. If this is also new to you, I recommend to read this article: Key Value Observing (KVO) on iOS for Xamarin, by David Seilaff. It gives a great overview on the topic and helped me understand what is going on with it.

This lead me to the following solution on the iOS platform:

Note the resolution group and the effect export above the namespace. Note the iOS specific type that is exported.

If everything went well, you should be able to see the highly anticipated messages on all 3 platforms: 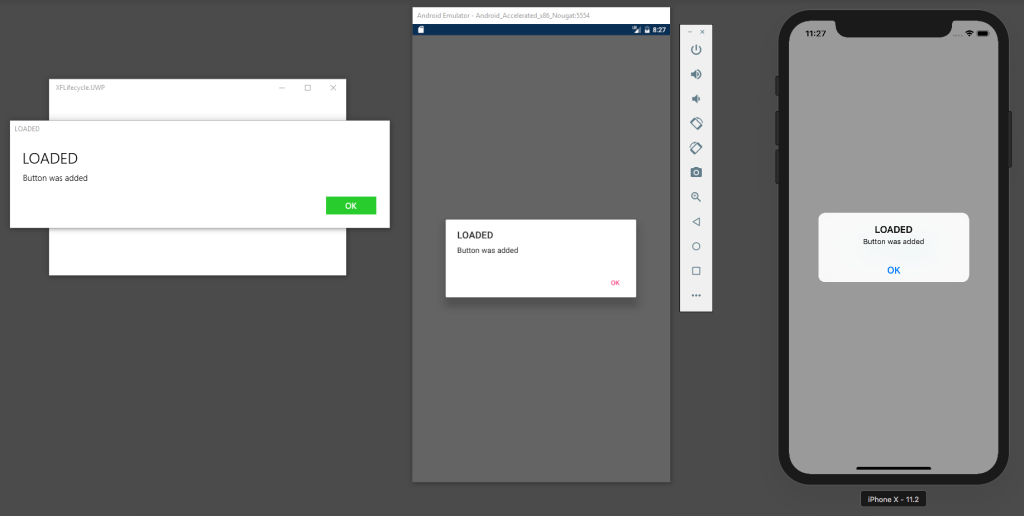 Also, after clicking the button (Which is hidden underneath the message), you should be able to see the unloaded message as well: 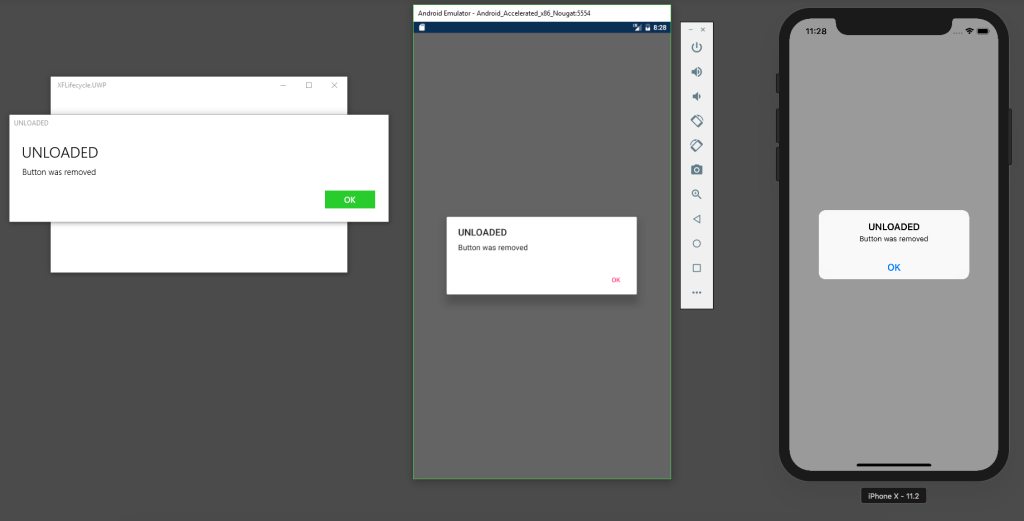 This concludes the journey to achieve lifecycle events in Xamarin Forms.

I realize that this solution is not perfect, and to be honest, it is very far from it. But I think it might suit a lot of initial needs.

I know that for my current needs, it is exactly what I need. 🙂


Feel free to browse the complete solution on my GitHub. 🙂